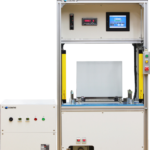 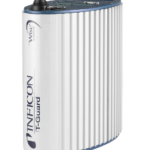 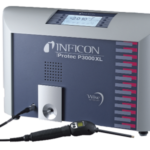 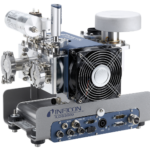 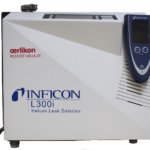 Why helium gas is used for leak test

・Only 5 ppm of helium gas exists in the atmosphere. It is less affected by the background of test environment
・Helium is safe inert gas without toxicity and explosiveness
・Because of its small molecule size, helium can penetrate through leaks easily
・It is almost not contained in the gas released from the tested part

How to select helium test method

Feature of each test methods

Helium gas mixer and helium gas recycle machine are available to reduce the running cost.
Please ask your nearest Cosmo office, if you are interested. We will provide the best solution, depending on the initial cost and running cost. 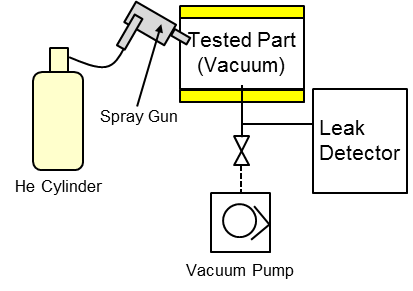 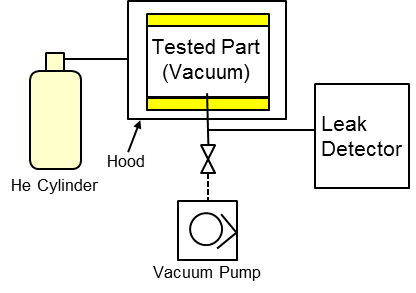 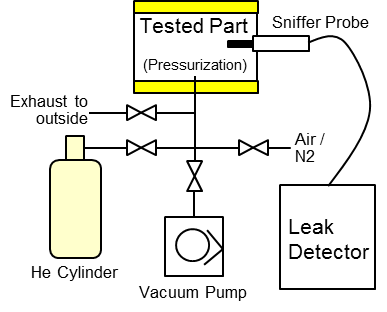 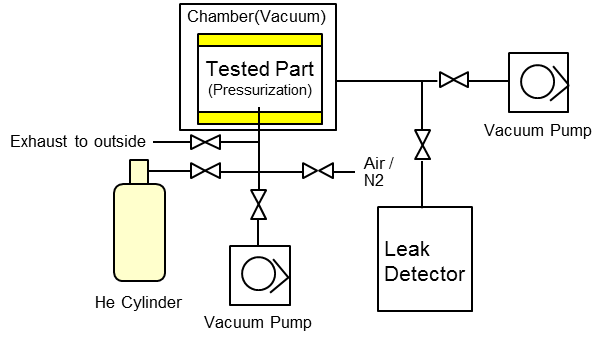 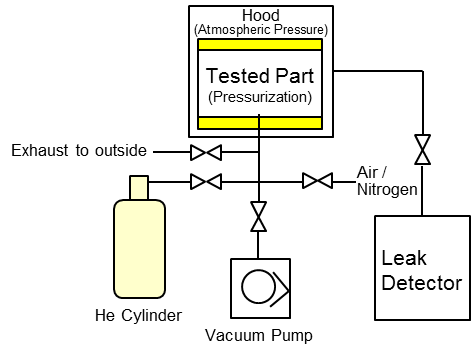 Tested part is placed in a hood and inside of the tested part is vacuum-evacuated.
Then, the inside of it is pressurized with helium.
The helium that leaks into the hood is accumulated for a certain period to detect the helium (concentration) 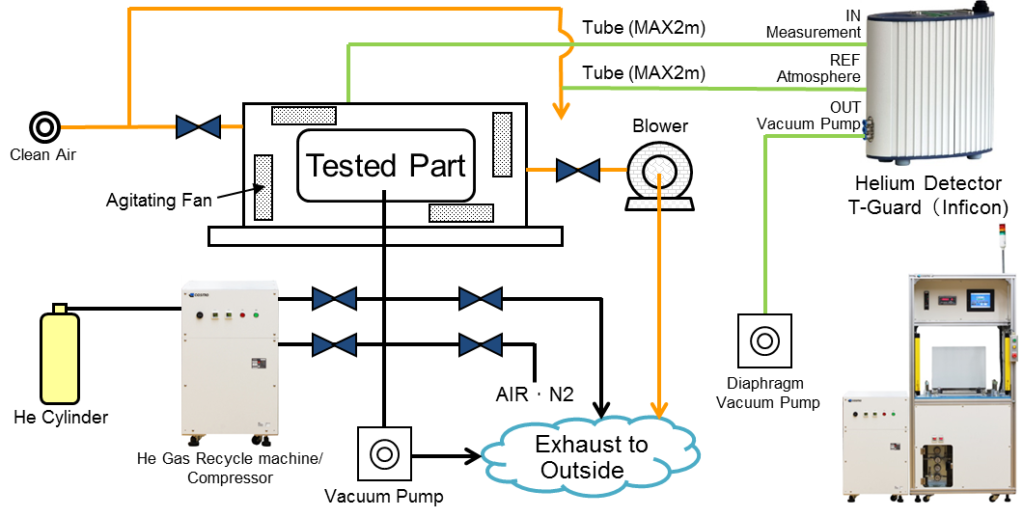 Unlike the commonly used helium detector, T-Guard is capable of carrying out the automated measurements of background helium measurement and helium leak measurement. 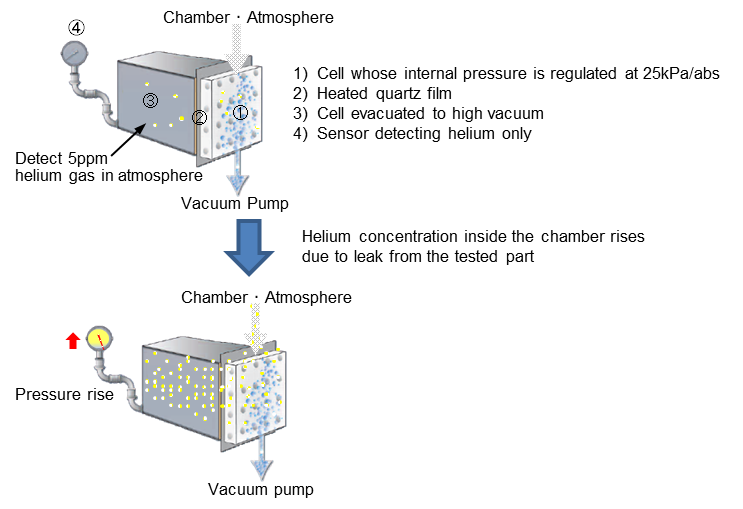 Unlike the commonly used helium detector of magnetic deflection mass spectrometer type, T-Guard detects helium based on the system specialized in the measurement at atmospheric pressure.

Quartz film allows the permeation of only helium.
When helium enters a cell regulated to 25 kPa/abs, helium is the only one can permeates through the quarts film, increasing the pressure inside of the cell which evacuated to high vacuum.
The value of the electric current generated by the operation of vacuum pump when the pressure rises is detected as a leak. 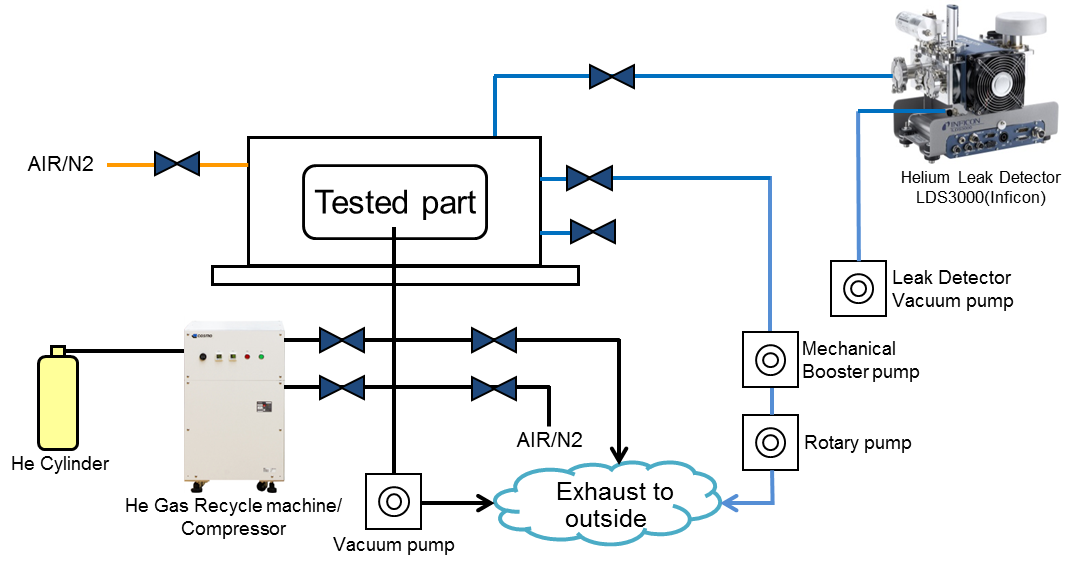 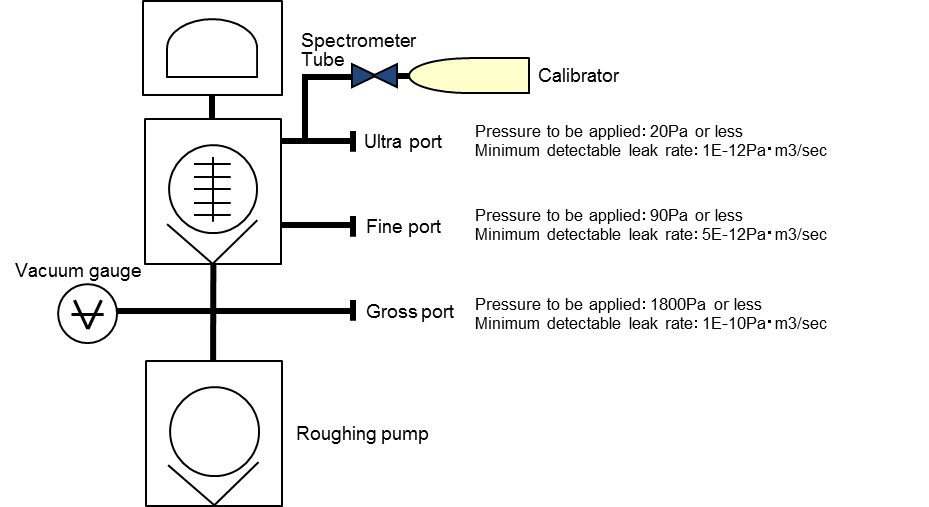 Helium enters LDS3000 reaches the spectrometer tube by back-diffusion phenomenon by a turbo-molecular pump, and helium leak rate is measured.
Leak detector with valves to automatically select a port according to the pressure to be applied are available.
Feel free to contact Cosmo for more detailed information. 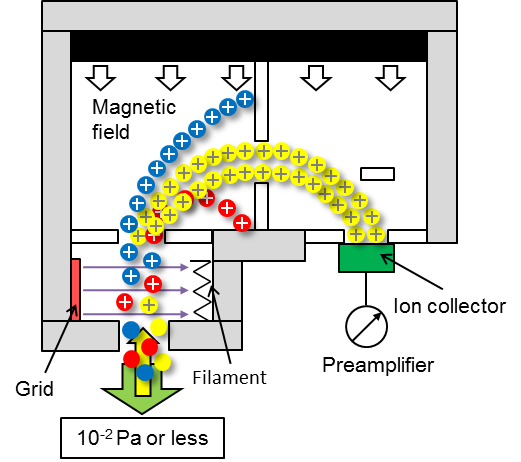 1. The molecular reaches the spectrometer tube are converted into positive ions by electrons of a filament, and are accelerated in the magnetic field and move.

2. The positive ions separate into their orbits according to the mass of the gas (helium) when it passes through the magnetic field.

3. Only the positive ions reach the ion collector are converted into voltage signal and amplified for helium measurement.

AIR LEAK TESTERS
Air Leak Tester is the automatic leak detector detects any leaks by the minute change of differential pressure and conducts OK/NG judgment. Ideal to be built into a production line for a laborsaving and a quality control purpose
DP Leak Testers ▼ ▲

FLOW
Variety ranges from F.S.10mL/min to F.S 500L/min are available. Promotes an automation and a laborsaving of the measurement
Air Flow Testers ▼ ▲
Flow Gauges ▼ ▲

This website uses cookies to improve your experience while you navigate through the website. Out of these cookies, the cookies that are categorized as necessary are stored on your browser as they are essential for the working of basic functionalities of the website. We also use third-party cookies that help us analyze and understand how you use this website. These cookies will be stored in your browser only with your consent. You also have the option to opt-out of these cookies. But opting out of some of these cookies may have an effect on your browsing experience.
Necessary Always Enabled
Necessary cookies are absolutely essential for the website to function properly. This category only includes cookies that ensures basic functionalities and security features of the website. These cookies do not store any personal information.
Non-necessary
Any cookies that may not be particularly necessary for the website to function and is used specifically to collect user personal data via analytics, ads, other embedded contents are termed as non-necessary cookies. It is mandatory to procure user consent prior to running these cookies on your website.
SAVE & ACCEPT